Winter Paralympics: The rally driver who crashed into championship skiing

Winter Paralympics: The rally driver who crashed into championship skiing

Rally car driver Chris Lloyd loved speed and racing against the best in the UK. Then, a devastating crash changed the course of his life and put him on the world stage.

“We were at the British Championships in 2011 and took a corner too fast,” he says. “The car left the road and flipped in the air and then we hit a tree upside down.

“The roof caved in which hit my head and flexed my neck.”

Lloyd briefly lost consciousness then came round hanging upside down in the car.

“I can remember my arms dangling but I couldn’t move anything from my neck down.”

He was trapped and panicking, but the rescue was deliberately slow and strategic because the paramedics had to ensure he didn’t suffer further injury.

“If they’d moved my neck in the wrong way it could have killed me,” he says. “They saved my life”. His co-driver escaped with “cuts and bruises”.

Lloyd was taken to hospital where he was told he was paralysed from the neck down.

“The consultant came to see me and just said life was going to be very different – I was never going to ski again or drive rally cars.

“His words stuck in my head. It was like a gauntlet dropped down to me.”

Lloyd hadn’t worked out what he wanted to achieve yet, but he knew, somehow, he would defy the consultant’s words.

He returned home and focused on rehabilitation. He had to learn the basics of how to walk again, climb the stairs, and work out how to slot back into family life.

His children were aged nine and five. His daughter didn’t understand what had happened but his son was fully aware.

“My boy didn’t think I’d be able to play football with him and was really upset.

“That was the hardest bit,” he says. “I felt like I’d let my family down, to see my kids upset was something really powerful and that’s why I set myself this goal.”

The crash had crushed Lloyd’s spinal cord and interrupted the connection between his brain and limbs – so physical movement was greatly restricted. It also reduced his energy.

As well as receiving regular rehabilitation and physiotherapy, he taught himself visualisation to try and stimulate his body to function fully. 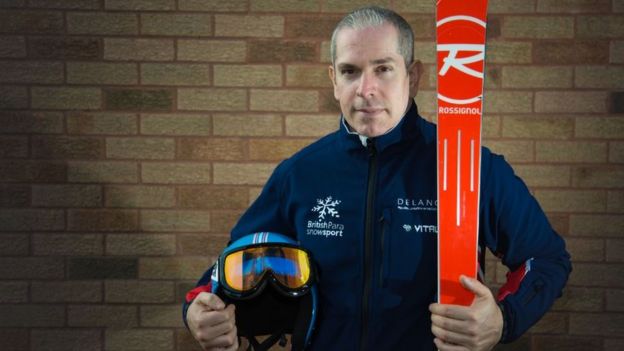 He would imagine white light reaching and regenerating cells in his body to make his limbs move.

“I used to visualise my thumb moving because I couldn’t move it. And then one day I got it back,” he says.

“People don’t really understand the power of your mind but, I think if you believe something can happen and you try hard enough, you can make it happen.”

Lloyd was making steady progress and, while on a trip to his rehab centre in Cardiff, he spotted a poster for the then upcoming London 2012 Paralympic Games.

“That was it,” he says. “I set myself the goal to get to a Paralympics.”

Lloyd first took to the slopes as a 14 year old and continued as an adult. It is considered good for rehabilitation so he started going skiing with his family. He found it was beginning to improve his condition and quality of life.

By coincidence, he heard that a disability snowsport competition was to be held and entered it. He came away with the gold medal.

The British team took note and invited him to train with them, but this opened up some different challenges for him.

The intensity and concentration of training made his fatigue worse and drained his cognitive function.

“It’s really difficult for me to get from top to bottom of a slope because of the fatigue,” he says. “By the time I’ve come through the finish line I can barely stand and I can’t really see the crowd because I’ve exhausted my body to the point of shut down.

“As soon as they click me out of my skis I don’t really know where I am and I’m a little bit sluggish for maybe two or three days after one intense race.”

It is something he has taught himself to manage. He tests his mind when it is at its most tired at the end of a training session and plays games to push and increase his mental capacity.

“I’ll play reaction games, memory games. You’ve got to remember the course and my memory is not the best, because of the bump to the head. So I use them to push the level up a bit and to react when I’m in that race environment. It definitely makes a difference.”

Lloyd’s aim was to compete in Pyeongchang. He did it.

He raced in the Downhill and Super G and finished 20th and 25th respectively.

He was nervous on day one but hoped to enjoy his final race. It didn’t go to plan, he was late out of the gate and says he “had to fight all the way down”. For Lloyd, the golden moment was crossing the line and seeing his family which he describes as “amazing”.

“My aim was to get to the Paralympics so it was really emotional because I felt like I was coming to the end of my journey and I’d reached my goal.”