The traditional closing ceremony has brought the curtain down on the 2018 Winter Paralympics in Pyeongchang. If you didn’t get to watch it, here are some of the highlights of a lavish and firework-laden show.

In his speech during the ceremony, the president of the International Paralympic Committee, Andrew Parsons, paid tribute to the physicist, who died last week.

“Tonight is a celebration that if you dare to dream, you must do your best to fulfil it. One man who had a dream was the late Stephen Hawking – an inspiration to us all. He urged us all to look at the stars and not our feet.”

“Over the last 10 days, the stars have shone brightly here in Pyeongchang. While Hawking tested the limits of his imagination, Paralympians have pushed the boundaries of endeavour. The world has focused not on what holds you back, but on what pushes you forward. Every generation gets a chance to change the world. Paralympians! This is your time to be a catalyst for a more inclusive society.”

Hawking’s quote – “however difficult life may seem, there is always something you can do and succeed at” – was also referenced by the president of the Pyeongchang organising committee, Lee Hee-beom.

A faithful friend working through it all

The musical highlight of the ceremony was without doubt a performance by pianist Yeaji Kim and singer Hee Sang Lee, on a soaring song called “You are a Flower”.

South Korean Yeaji Kim has been blind since birth, and started playing the piano aged five. She has studied in the US, and has developed a revolutionary “tactile stave notation” system to make reading music easier for blind people.

Also on stage with her in Pyeongchang was her service dog, Chan Mi, who she has described as “my best friend, as well as a member of my family”. 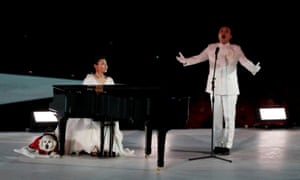 The music programme for the ceremony was varied – taking in traditional South Korean folk music while the Paralympic flame was extinguished, and a highly energetic performance by K-pop star Ailee. Ailee also accompanied the the Bae Hui Gwan Band, the members of which have various disabilities.

A busy day for Menna Fitzpatrick

Nineteen-year-old Menna Fitzpatrick started the day by winning Britain’s first and only gold medal at the Games. It was the Welsh alpine skier’s fourth medal, making her the most decorated British Winter Paralympian of all time. She was also Britain’s flag bearer for the closing ceremony. 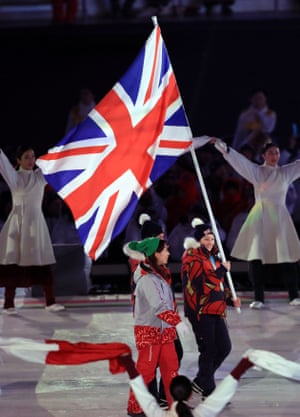 Other flag-bearers included Oksana Masters, whose birth defects seemingly caused by Chernobyl radiation have not stopped her becoming a gold-medal winning Paralympian, and New Zealand’s Adam Hall, who was also due to receive the Whang Youn Dai award.

The North Korean flag was carried by a volunteer. The country’s two skiers had already departed South Korea, with the country having participated in the Winter Paralympics for the very first time.

For some reason, Bandabi the bear, the mascot of the Games, appeared posing as a post on social network Instagram. 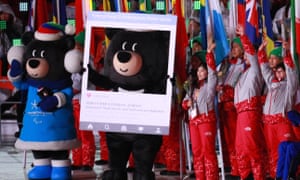 As ever, an essential part of the closing ceremony was the passing of the Paralympic flag from one host city to the next. In 2022, Beijing will become the first city to have hosted both the summer and winter editions of the Paralympics. The Chinese section of the ceremony featured a young woman with impaired hearing, dreaming of birds and flowers, and then participating in the dance that followed. 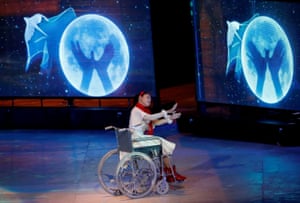 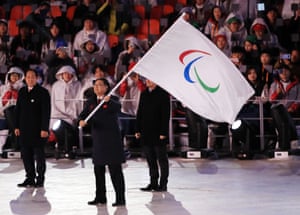 Your last chance to the see the Pyeongchang stadium

The closing ceremony of the Paralympics will be the last event staged in the Pyeongchang Olympic stadium. It was also only the fourth event to be staged there. The 35,000-seat stadium was built specially for the opening and closing ceremonies of the Winter Olympics and Paralympic Games, and will be demolished in due course. This is not the first time this has happened – the Théâtre des Cérémonies for Albertville in France was a similar temporary structure. 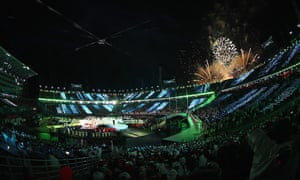