If the buckets of spring showers coming down around Metro Vancouver are getting to you, you’ll find a wintry refuge still exists in the local mountains.

Children on spring break found great ski conditions on Monday, with all the precipitation coming down as snow at the three ski hills on the North Shore.

Langley resident Ben Wong was at Mount Seymour with his kids. He said the snow conditions were amazing, and he took a little time off work.

“We gotta make some time for the kids, right?”

“It’s awesome. The visibility [is] maybe not so great, but I’ll take this any day over rain,” said Wong.

His daughter, Emily, who’s got a break from her Grade 6 classes, described the snowboarding as “great,” and the conditions as “very powdery.”

Her message for other kids hiding from the rain down near sea level? 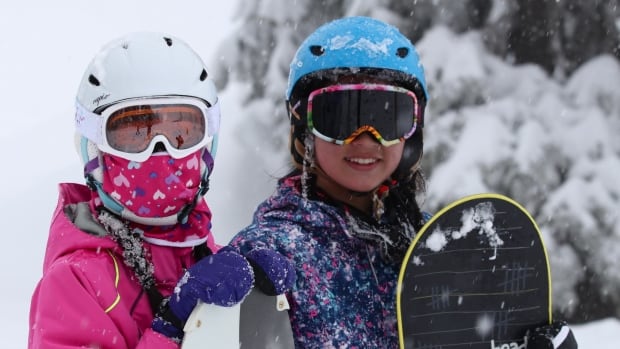 Mount Seymour spokesperson Simon Whitehead reported the hill had about 33 centimetres of fresh snow on Monday, with more expected before Tuesday, if it didn’t turn to rain.

“We’re pretty excited for our late March snow dump,” said Whitehead. “Toward the end of the season, we get these big weather events, because it’s raining down in the city.”

Mount Seymour has a 3.5 metre snow base at the parking lot and Whitehead said on Monday they surpassed five metres at the top of the mountain. 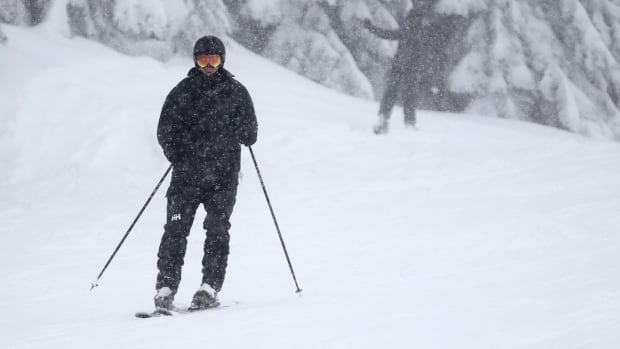 “Everyone wants to get on with other things, just gardening and playing golf and riding their bikes,” he said, adding that conditions should be great until closing day.

Cypress Mountain and Grouse Mountain have seen similar conditions. Cypress also closes after April 15, but Grouse may stay open a little longer if the conditions are good.

According to CBC meteorologist Johanna Wagstaffe, another cold Pacific storm system will make landfall Monday night and Tuesday, bringing another 15 to 20 centimetres of snow for the ski hills.

“There is more snow in the forecast for the local mountains tonight and tomorrow for those hoping to take in the great late season snow pack,” said Wagstaffe.

“For those wishing for a more spring-like spring break, you’ll have to wait until the end of the week,” she said, adding that Tuesday should see a short-lived mild period, but that type of weather won’t really settle in until the weekend, and cold showers will return again mid-next week.

But for Carson, Grade 3, it was all about the fresh snow on Monday, which he described as “fluffier [than usual], like a teddy bear.”