Snowboarding: Blizzard making name for herself on slopes

Snowboarding: Blizzard making name for herself on slopes

Kaitlyn Blizzard did her best to keep up with the snowboarding events at the 2018 Winter Olympics.

It’s understandable Blizzard may have missed some of the late-night coverage, however, given her jam-packed schedule.

She lives in the Pleasant Valley area and attends Francis Scott Key High School during the week before making the trip to Roundtop Mountain Resort in Lewisberry, Pennsylvania, where she practices with the local snowboarding team four times a week for three hours at a clip. On weekends she’s usually up around 6 a.m. to get to practice before heading down to Liberty Mountain Resort in Fairfield, Pa., where she works to pay for lift tickets and other expenses.

Blizzard, 17, is more than an avid fan of the extreme sport — the FSK junior is nationally ranked in two events for her age group by the United States of America Snowboarding and Freeski Association, and she’ll be making the trip in a few weeks to Colorado for the USASA national championships.

She’s a two-sport athlete at Key, playing field hockey and lacrosse, but Blizzard seems to know what the next few years are going to be like while she envisions her future.

“I want to be standing on the podium,” she said, “holding the gold medal, with the national anthem playing behind me.”

Blizzard said her love for snowboarding began during the 2010 Games in Vancouver, when she saw a few events on TV and decided she’d give it a try. Her first taste of the sport came by way of lessons at Liberty Mountain on a traditional board, said Wendy Bowersox, Blizzard’s aunt.

Blizzard started entering races about four years ago, she said, and competed in slalom and giant slalom events with an Alpine board.

Both involve downhill runs and maneuvering around gates — they’re 8-12 meters apart in slalom, 25-32 meters apart in giant slalom — while trying to turn in the fastest time. Two runs determine the winner in slalom races.

Blizzard said it took some time to get used to the equipment, from the racing boots to the feel of the different boards. But her runs became smoother with her dedication and practice, she said.

“The first race run I ever took, I fell,” Blizzard said. “And that kind of was like, ‘Oh crap.’ And then it was a race at [Roundtop]. I just went for it, and was successful. And I was like, ‘I really like this.’”

Her USASA medal count is growing as she gains experience.

Blizzard earned gold and silver for giant slalom (Snowboard Junior 16-17) during a Mid Atlantic Series competition Feb. 18 at Roundtop. The day before, she claimed a pair of golds for slalom at the same event.

Blizzard has five gold medals and three silvers in 2018, after collecting only two golds in 2017, which have helped her earn a spot at nationals at Copper Mountain, Colorado at the end of this month.

“She works really hard,” Bowersox said. “It definitely means a lot to her.”

Blizzard is active in 4-H, and Bowersox said she sells livestock to help pay for snowboarding trips and expenses. There is some sponsorship, but Bowersox said for the most part it’s Blizzard saving her own money to make these events happen.

Then the competitiveness kicks in.

But Blizzard, a member of the Roundtop snowboarding team, said she has a few teenage moments now and then during her non-stop travels and crowded weeks.

“Sometimes there are days where I’m just like, ‘Wow I really want to just sleep in,’” she said. “One more hour, two more hours.’ But then I’m like, ‘The Olympians don’t really sleep in that much, do they?’” 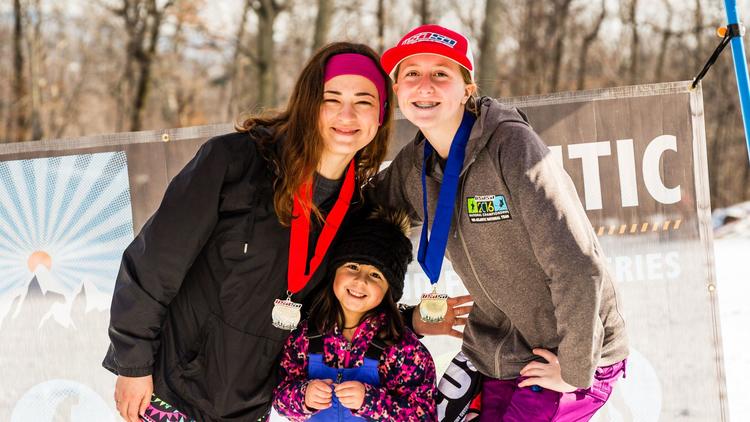