Skofterud, age 38, was reported missing Saturday night by her partner Marit Stenshorne after Skofterud didn’t return to the hytte (holiday cabin) where they had just begun a summer holiday on the island of Tromøya off Arendal. The couple had attended a concert together in Arendal earlier Saturday evening.

The search and rescue vessel Inge Steensland found the large jet ski Skofterud is believed to have been riding alone and Skofterud’s body on another local island, St Helena, just outside Arendal. A doctor from an air ambulance summoned to the site declared Skofterud dead at the scene.

Austad told NRK that it was too early to come to any conclusions on what caused the fatal accident. “I think this will take a long time because of the scope of the investigation, at least several weeks,” Austad told NRK. “But the main picture is that this was an accident that didn’t involve anyone other than Skofterud.”

The police were also calling in Norway’s national accident investigation board. There had been lightning, thunder and heavy rain in the area Saturday night, along with poor visibility. Preliminary findings from the police probe released at midday Monday reveal that the police think Skofterud died around midnight Saturday after her jet ski hit land. They were still awaiting a preliminary autopsy report but believe that after weeks of light evening, Saturday night turned dark and even rainy. That, and the high speed of a jet ski could have contributed to the fatal accident.

Ruling out ‘simple theories’
“We will keep all options open and can’t get hung up on simple theories,” Austad said regarding cause of death. He dismissed one theory that Skofterud was struck by lightning, and called for help from the public regarding any possible observations of the former skiing star out riding the jet ski.

Skofterud ranked as one of Norway’s top cross-country skiers and was a member of the women’s national ski team from 2001 to 2014. She was best known for her participation in relay races that won Norway an Olympic gold medal in 2010 and the World Championship in 2011. Skofterud also won the long-distance Vasalöppet in Sweden in 2012. 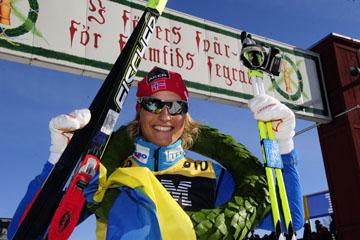 She became part of a private ski team, Team Santander, in 2014 but retired the year after because of injury and illness. She worked as an expert commentator for the Discovery Channel during the Winter Olympics in South Korea earlier this year.

Born and reared in the small community of Slitu in Eidsberg, southeast of Oslo, she was considered the area’s greatest ambassador, according to Eidsberg Mayor Erik Unaas. He told state broadcaster NRK that the community were “shocked and stunned” by the news of Skofterud’s death. “Today our flags are flying at half-mast,” Unaas told NRK. “There’s great sorrow here.”

Also among Norwegian athletes, including Norway’s ski queen Marit Bjørgen, who wrote in a press release that she was “shaking and in shock” over Skofterud’s death. “Dear Vibeke, this was much too early,” Bjørgen wrote. Bjørgen added that Skofterud was “a tough competitor on the ski trails “but most important, the warmest, kindest, toughest and most fun woman in the world. It was never boring around Vibeke, and the empty space she leaves is huge and impossible to fill.”

Professional skier Petter Northug wrote that it was “incomprehensible and sad to hear that Vibeke Skofterud is gone. We had many fun years together on the national team.” Erik Røste, president of Norway’s national skiing federation, called Skofterud “an important ambassador for the sport of skiing with her winner’s spirit and great engagement.” Odd-Bjørn Hjelmeseth, a former skiing star himself who became a coach for the national team, called Skofterud’s death “tragic” and “difficult to find words for.” He and others recalled her “infectious humour” as well as her skiing skills.