Pita Taufatofua was in his fourth decade when he first touched snow. By then, he had already decided that he wanted to be an Olympic cross-country skier and was well on his way to realising his dream.

This week, Taufatofua will become the first Tongan ever to compete in the cross-country event at a Winter Olympics when he straps on his skis in Pyeongchang. But his journey from the beaches of the South Pacific to the starting gate in South Korea has been far from textbook.

The world first saw Taufatofua as an oiled up flag-bearer wearing a necklace of shark’s teeth and a Taʻovala [a traditional Tongan skirt] during the opening ceremony of the 2016 summer Olympics in Rio. There, he was competing in taekwondo and was beaten 16-1 in his first match.

Despite failing to win a medal, Taufatofua shot to prominence and the former youth counsellor was inundated with modelling contracts, offers from Hollywood and sponsorship deals. 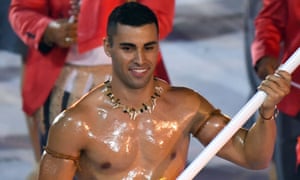 But Taufatofua was not interested in fame. Instead, he ditched taekwondo and took up cross-country skiing, despite hailing from a country where the average annual temperature is 25 degrees.

“I was thrown into a lot of big and great opportunities, in Hollywood stuff, modelling stuff,” says Taufatofua, speaking from his brother’s London flat where he was taking a two-day break from training in Iceland.

“But for me, at that time, my goal was, what’s my next big challenge? What is completely impossible, what can’t be done – that’s what I want to do. And I found cross-country skiing.”

Taufatofua is one of seven siblings, his father an agricultural worker, his mother a nurse. The death of one of his sisters when he was a young boy crystallised his desire to make the most out of life, and chasing seemingly impossible dreams has been the driving force on his 20-year journey to the Olympics.

In early 2017 Taufatofua strapped planks of wood to his feet and began running up sand hills, spending his evenings alone watching Youtube videos of the world’s best skiers.

Taufatofua shed weight, dropping 15kg to weigh in at 75kg – close to the level that most cross-country skiers maintain, making them lighter and faster on the slopes.

Graduating from wooden planks to roller skis, he relished the challenge of the frigid foreign sport, the excitement of trying to prove his sceptics wrong, and the extreme mental and physical exhaustion his new passion offered.

“To me it is not crazy at all, it seems really normal to me [switching sports],” says Taufatofua. 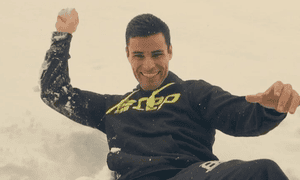 Taufatofua, who is now based in Brisbane, has spent the last year training in the northern hemisphere in minus 15-20C conditions, learning the art of cross-country skiing, something he says most of his competitors started “straight out of the womb”.

Living in cheap hostels and eating basic meals of tuna and pasta, the 34-year-old has only been able to afford one pair of skis and one knob of wax, but that didn’t stop him qualifying for the 2018 Winter Games in Pyeongchang; a gobsmacking achievement for a Pacific Islander who hadn’t seen snow until a couple of years ago, and is only the second Tongan ever to qualify for the Winter Olympics (Bruno Banani competed in luge in 2014).

“Is it a level playing field? Absolutely not. Do I let that get to me? Absolutely not. I know sports is … rarely is it ever level. But if I start thinking about that I am stuck there,” says Taufatofua, who has started a go-fund-me page to raise funds for the winter Olympics.

“A year ago, everyone was saying this is impossible. But when you come from Tonga or the Pacific Islands we don’t see things the same way, we don’t see anything as impossible. We are very positive in that regards and we are very resourceful. We are a developing country so we just try to find ways of succeeding however we can.”

Taufatofua is hopeful but not delusional about his chances in Pyeongchang. Attending is already the icing on the cake.

With a rigidly optimistic outlook, Taufatofua has a self-help book in the works and hasn’t ruled out a return to the summer Olympics in 2020.

“Its pretty clear we’re misfits in the competition. It gets stuck in your mind that you need to do something – to prove yourself in some way. And that’s not just for me, but for all the exotic and small countries, for the whole Pacific Islands.”