Lake Winnipeg ice fishers reeling in ‘fish of a lifetime’ thanks to 1997 flood, says veteran angler

Lake Winnipeg ice fishers reeling in ‘fish of a lifetime’ thanks to 1997 flood, says veteran angler

The Flood of the Century may have spawned the largest walleye that Lake Winnipeg ice fishers have seen in recent memory.

Veteran ice fisher and nature guide Lee Nolan said this year, fishers are finding giant walleye in Manitoba’s largest lake — and he said it all started with excellent spawning seasons.

Expo gives anglers all the goods on ice fishing

The 1997 spring flood that affected large parts of Manitoba is considered the Flood of the Century, meaning the water reached the highest point it’s expected to reach in a century.

“Those fish are getting very mature now, so that’s why you’ve got a higher percentage of the biomass in the lake [that] is actually very, very, large fish.”

So how big are the fish?

“I believe the current ice-fishing record is about 35, 36 inches [roughly 90 centimetres] and I think there’s some fish that size out there,” said Nolan, adding so far, the biggest one he’s caught was 32 inches (81 centimetres).

“We’ve got a good shot at breaking a world record up here this year, I think. There’s lots of people catching fish of a lifetime out there right now.”

It’s hard to say what this means for the health of the lake, said Nolan. There is concern about pollution in Lake Winnipeg, causing algae, which feeds the smaller animals that walleye eat.

“There’s lots of speculation that the lake has got some serious issues with the fish population. And so I think what will probably happen, the reality is these very large fish are going to be gone in two, three or five years at the most,” he said.

“So those fish will be gone, but we’ve got new ones coming up, and it’s a very complex issue on kind of what’s happening in the lake with all the nutrient load and everything. But right now, that’s what’s feeding the lake — there’s lots of food in the lake right now.” 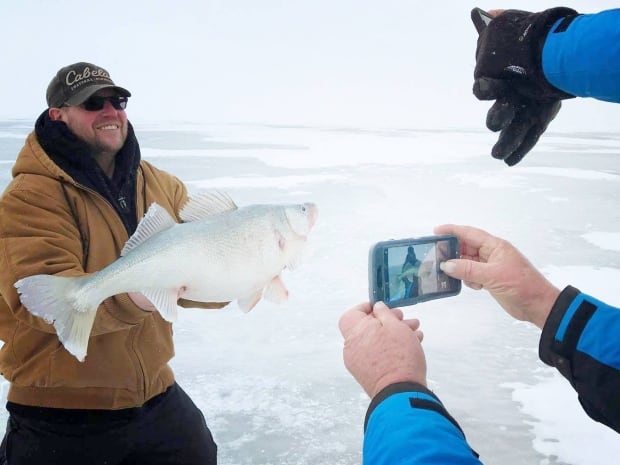 Walleye in Lake Winnipeg have always been big, said Kevin Casper, the province’s regional fisheries manager for the Central Region.

“Lake Winnipeg has big walleye — there’s good food sources in the lake for the walleye, so they’re able to grow to a very large size. It’s been like this for a while. This isn’t the first year that anglers have been catching big walleye.

“[It] probably exploded in 2010, and since then, that 2000, 2001 age class has grown larger and larger every year, so the walleye being caught by recreational anglers has been getting bigger and bigger.”

Because Lake Winnipeg is such a large body of water, walleye have ample opportunity to spawn on sandbars and reefs, said Casper, and if the temperatures don’t drop in spring and the wind stays calm, it leads to better spawning years.

Travel Manitoba has a program allowing anglers to submit their walleye catches to qualify for a master angler badge, said a provincial spokesperson. Walleye have to be at least 71 centimetres (28 inches) in length to qualify.

While the numbers are only from those who have submitted their catch, they’ve risen from 135 qualifying walleye catches in 2012 to a high of 438 in 2016. Last year saw 203 walleye submitted.

In the meantime, the secret is out around the world and thousands of people are heading out onto the lake every weekend, said Nolan.

“For years now, there’s been thousands and thousands of people from Minnesota, North Dakota, South Dakota — actually, all over the world.

“I’ve fished with a guy from Los Angeles, people from Australia, from Europe — there’s literally thousands of people coming up to ice fish here on weekends. On a typical weekend we have 2,000 to 3,000 people up fishing on the lake.”

“It’s great for local towns and businesses and communities surrounding the lake,” said Casper. “It brings a lot of people into the area. It gets people out of Winnipeg and enjoying the outdoors.”

The Art of Angling: Ice fishing is shaping up well