‘It’s freedom. I haven’t been able to move that fast under my own steam for years’

‘It’s freedom. I haven’t been able to move that fast under my own steam for years’

Be fearless. That was the slogan used by the British Paralympians at the Winter Paralympics in Pyeongchang  in March. It’s something Denice Reeves has taken to heart since a car accident left her with a permanent brain injury 30 years ago. “I can’t say that a lot scares me now,” she says dryly as we drink hot chocolate overlooking the slopes at Montgenèvre in France’s Southern Alps. “I like to do things to get my heart racing. I like to give myself challenges.”

Her challenges – apart from having to relearn “absolutely everything” after she came out of a seven-month coma – have included a tandem parachute jump, white-water rafting and zip-lining. This is in spite of limited mobility in her limbs and worsening arthritis in her wrists, which was exacerbated by a second car accident two years ago. 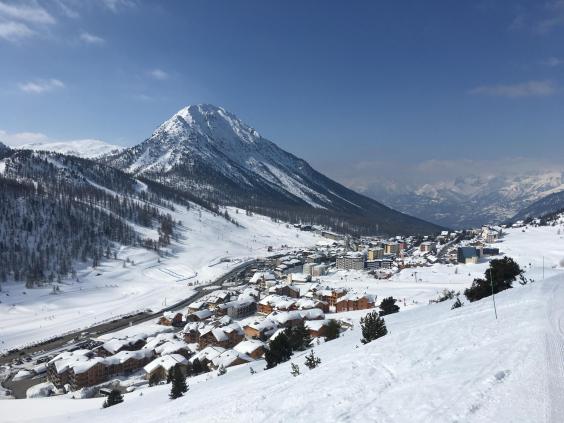 But a chance visit to the Snow Centre in Hemel Hempstead in 2013 set the 52-year-old on a different course: skiing. “It took me about six months to be able to stand up on the ruddy things, let alone do anything,” she recalls. “But I had goals. First I wanted to be able to do the centre’s nursery slope on my own, then the main slope. Then, I wanted to go away. So I did, last year, to Montgenèvre. I so enjoyed it that I had to come back. And I couldn’t have done it without Catherine’s help.”

Catherine Cosby is founder of Ski 2 Freedom, a charitable foundation that advises people with disabilities and life-changing conditions on how to get the most of out a mountain holiday – winter or summer. She’s a crucial link between travellers with special needs and ski schools, accommodation providers and tourist boards.

Her own daughter is severely disabled, which is one of the reasons why Cosby is so determined to spread the word about the rejuvenating effects of being in the mountains. “My aim is to make the mountains as inclusive and accessible as possible for everybody,” she says. “You’re encouraging people to become a part of a very special environment. When people contact me, the first thing is always which resort is going to offer the best ski instruction to meet those needs. Montgenèvre pretty well meets them all.”

Reeves isn’t the first person to fall for Montgenèvre, set in a pass barely 2km from the Italian border near Briançon. You can walk or ski to Italy for lunch and swap French fondue for Piedmont pasta. It’s the only French ski resort in the mainly Italian Milky Way (or Via Lattea) ski area, and its slopes have more variety than its Italian cousins. It has an enviable snow record, and its large choice of beginner slopes at high altitude means that even novices can feel they’re on top of the world while they’re learning how to whoosh down the mountain.

For Reeves and other skiers with disabilities and special needs the instruction offered by the ESF (Ecole du Ski Français) ski school is what brings them here. France is a world leader in what the French call handiski, and its ESF instructors all over the country have to undergo extra training to use the specialist equipment and to learn how to ski with people who are blind, deaf or have conditions ranging from autism to multiple sclerosis.

The head of Montgenèvre’s ESF, Christian Jullien, tells me how their goal is to get people to move from the dualski – a compact chair on skis powered by an instructor on skis at the back – to the uniski, in which skiers are strapped into a sit-ski but use outriders instead of poles to control their movements. “It’s very important for the skier to learn autonomy,” says Jullien, although he acknowledges that people with little or no upper-body strength won’t be able to do this.

A uniski is out of the question for Reeves, so she starts off in a dualski driven by the affable Thomas from ESF. He straps her into the seat and they’re off down the gentle green slope towards the Serre Thibaud lift. Things don’t stay gentle for long, however, as Thomas takes Reeves down a series of tough reds and even a hair-raising black run.

A look of dazed wonder spreads across her face as she recalls the sheer exhilaration of speeding down the mountain. “I can’t adequately describe the feeling, and I’m quite good with words,” she says. “The intensity of the wonderfulness of being able to slide in control down somewhere as beautiful as this – it’s beyond description. 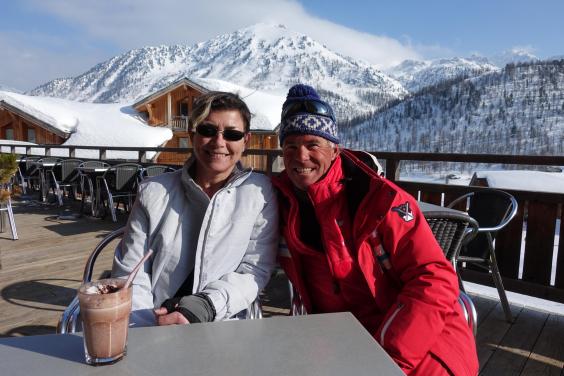 “It’s freedom. I haven’t been able to move that fast under my own steam for years.”

Later in the week, Reeves tries stand-up skiing. As Thomas skis backwards, Reeves clings tightly to a pole and gingerly makes her way down a green slope. She’s disappointed with herself that she can’t do a blue, but the pain in her wrists is too debilitating. “There have been times when I’ve thought, oh sod it, just give it all up,” she says, “but I think no.