Hiking the Swiss Alps in Style

Hiking the Swiss Alps in Style

In much of the world, backpacking means a a rugged pair of boots, a heavy pack slung over the shoulders, a sleeping pad on the ground, and freeze-dried food.

But in the Swiss Alps, backpacking can be a good deal more luxurious, thanks in part to a collection of sublime villages that nestle between iconic mountain passes, and in part to adventurers like Greg Witt, a former travel agent from Utah. His company, Alpenwild, the largest tour operator in the Alps, has designed a trek through some of the world’s most epic scenery that is somehow at once challenging and posh, a journey whose spoils come at the close of each day, rather than the trip’s end.

Witt’s carefully curated exploration of the Haute Route—regarded as the Alps’ best hike—was already at the top of a handful of guided trips through the dendritic Rhone valleys and the flanks of the Val de Bagnes. And this year, it’s gotten an upgrade, offering a deluxe version of the same trip, for US$4,895 per person.

Alpenwild isn’t the only tour operator in the Alps: companies like Alpine Treks and Cloud 9 Adventure also offer guided and self-guided treks through the Haute Route. But Witt’s company is now the largest among them, and his lodging connections are the most posh.

Alpenwild’s standard 12-day Haute Route trek guides hikers from Chamonix in France to Zermatt in Switzerland, and the daily luggage transfers available to clients means hikers only need tote a light backpack stuffed with rain gear and some snacks.

Most of the company-arranged high-end hotels feature modern bathrooms, charming ambience, and food fit for Michelin. A stay in the preserved medieval village of Grimentz is a walk back in time, where apron-clad women scrape gooey cheese from rounds of raclette melting over an open fire. 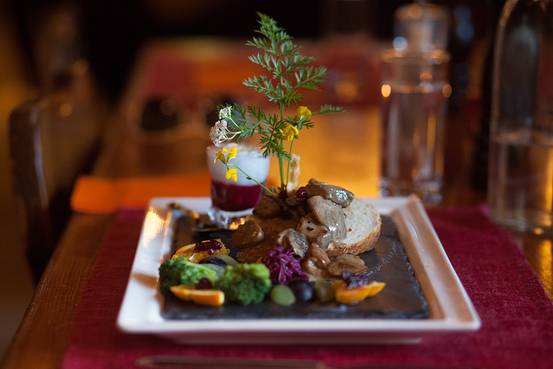 A steam in the hammam at a four-star Belle Epoque hotel in St. Luc after conquering an alpine pass soothes tired muscles. There is still some ruggedness to the trip, however, including a couple nights at sparse “huts” sandwiched into the route that are charming yet rustic.

These are the 5 best hiking areas near Palm Springs

With a booming economy and the dollar strong against the euro and Swiss franc, Witt is seeing a crush of demand for the Haute Route. Alpenwild’s deluxe version of the trek cuts two days off the trip and skips huts altogether, adding a rest day and spa treatment at the Grand HotelBella Tola in St. Luc and another luxurious massage at journey’s end in Zermatt, at the four-star Hotel La Ginabelle.

Alpenwild announced the new trek last year. It was an instant success.

“Every one of our Deluxe Haute Route sections has sold out,” Witt says. “People like the idea of hiking in style.”

Witt first visited the Alps in 1970, staying in a youth hostel and hiking to the base of the Matterhorn. In the 1980s, he started a travel company in Utah, then sold it, and decided to leave the states. He chose Switzerland. “They haven’t had a war in 500 years, and everything works like clockwork,” he says.

Witt’s bet on the Swiss Alps is a smart one. The magic of this famous range is due in part to the history of its hiking trails, which served as trade routes between villages dating back to the Middle Ages. The proximity of these alpine villages allows modern trekkers to experience the grandeur of backcountry hiking and the cultural immersion only found in small historic towns in one memorable adventure.

With views of glaciers, ice falls, and the Alps’ highest peaks, a culinary exploration of Valais cuisine and a balance of history and luxury in each town along the way, Alpenwild’s Deluxe Haute Route is arguably the best immersive trek in Europe.

Backpackers often choose scenery over comfort, knowing the best views of the most pristine natural wonders usually require some effort to enjoy. Alpenwild’s Deluxe Haute Route trek does require hikers to make some choices, but they demand little compromise.

Instead of deciding between a glorious mountain vista or a posh Swiss chalet, Alpenwild’s trekkers will only ask themselves which chef-inspired entree to choose from the dinner menu, whether to luxuriate in the Finnish sauna or recline on lounge chairs overlooking the Val d’Anniviers, and how many wedges of French cheese and saucissons (sausages) from the Chamonix farmers’ market will fit into their day packs.