The group behind the construction of a winter activity park for tubing, skiing and snowboarding in Saskatoon says its goal is to be operational this winter.

The first phase of construction for the ski hill and winter sport facility at Diefenbaker Park, worth about $2 million, broke ground on Friday.

“Our park is unique, it’s different, so a lot of people are probably questioning, well, is this happening?” said Letts.

Optimist Hill is already the location of a free toboggan hill, which is set to be expanded, but the project will also see the creation of a new paid section of the park.

The entry fee will provide access to an open snowboarding area with rails, boxes and jumps, and a “magic carpet” conveyor to carry people to the top of the hill. 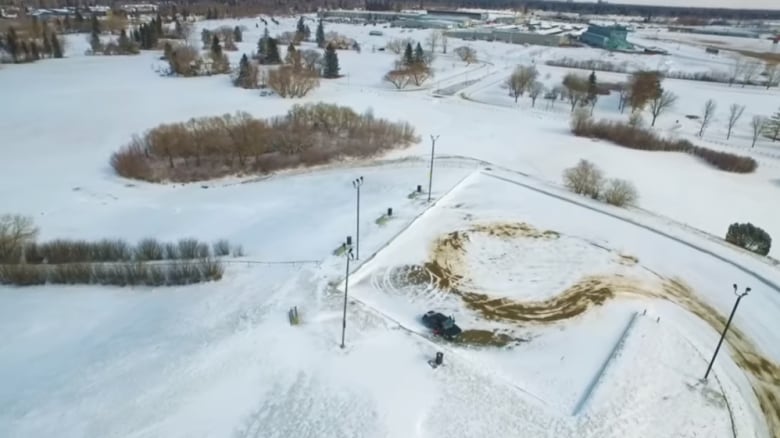 Another open area, with a separate conveyor, will be created for downhill skiing and snowboarding.

Five tubing lanes are also included in the plan and Letts said the group wants to run snowshoeing tours along the riverbank trails.

The hill currently has an elevation of about 12 metres, which will be increased to about 21 metres by redistributing 160,000 cubic meters of dirt.

Letts said the club has raised about 75 per cent of the approximately $2 million it needs for the first phase of the project, which he expects to be completed some time this winter. The campaign is still looking for a title sponsor.

The next phase, worth approximately $5 million, would include the construction of a village and chalet with a concession counter, function area and rooms for school classes to gather during day trips.

He said the completed park would employ between 12 and 20 people.

The entry prices, Letts added, would be “extremely accessible.”

“We want all children and families from a variety of social and economic backgrounds to come and enjoy the park,” said Letts.

Based on the findings of an Insightrix survey, Letts is confident the hill will be used frequently by the city’s residents.

He said the budget includes money to buy and run snow-making equipment for low snowfall periods.

The Optimist Hill campaign is also working with the Lake Louise Ski Resort in Alberta, which Letts said would be helping with expertise and logistics in the development of the Saskatoon hill.

“Obviously we don’t very often build ski resorts in Saskatchewan so their engineer out there is just invaluable, with the different lift systems and some of the different things to do and not to do,” said Letts.

He said the project’s future executive director would be going to the Alberta resort to learn from the team there.