A Scottish climber feared dead on the world’s 12th highest mountain was rescued after his rucksack was spotted where he had fallen.

Aberdeen-born Rick Allen, a highly experienced climber based in Aboyne, was in the Himalayas with climbing partner Sandy Allan, from Newtonmore.

A base camp cook saw his rucksack and then a drone was used to locate him. 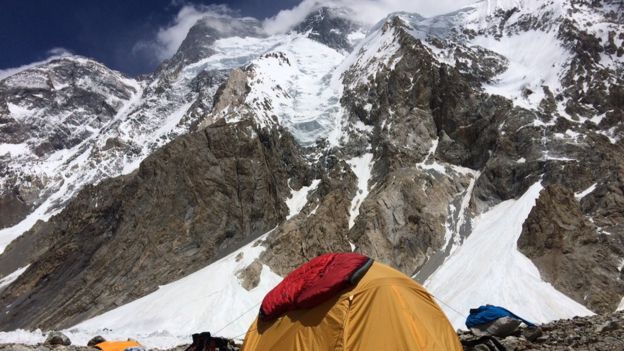 Mr Allen, who suffered cuts in the fall and had frostbite, had been trying to make his way off the mountain when his rescuers reached him.

After being brought back to a base camp, he was flown from the area by helicopter for treatment to his frozen toes.

Mr Allen said after he had failed to return as expected from his summit bid “a number of people had assessed the situation and come to the conclusion that I was not going to come back”.

He added: “I think Sandy knows me well enough that I can hang in in some pretty tough situations. But I think even he was struggling”.

Mr Allen said the use of the drone was “significant” because it being able to show images that he was still alive “gave everybody hope”.

His friend and long-time climbing partner Mr Allan said: “He is a tough and strong willed man and also incredibly lucky that a cook and then the drone spotted him.

“We were convinced he was dead. 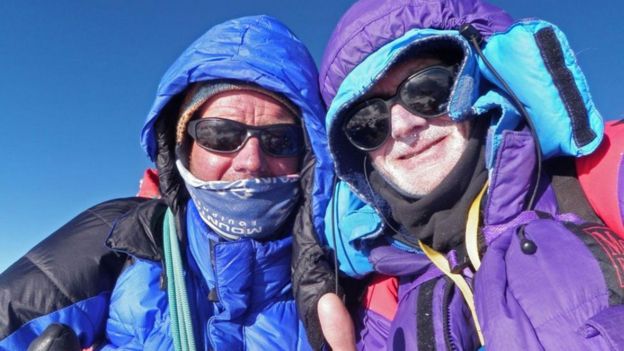 Mr Allen and Mr Allan had spent a few days making an attempt to reach the summit of Broad Peak.

Mr Allan decided to turn back due to high winds, while his friend opted to make a solo bid for the top. He fell from the ice cliff during his ascent.

Thirty-six hours later, a Japanese cook thought he could see a rucksack in the distance on the mountain.

He raised the alarm and the drone was deployed to check the location.

The drone was flown at a height of up to 8,400m (27,559ft) around Broad Peak and K2, which is the world’s second highest mountain after Everest.

After his rescue from the mountain, Mr Allen was flown out of the area for further treatment to his feet. The mountaineer lost half of one of his big toes to frostbite during a previous expedition.

Mr Allen said that when in the wilderness the appearance of a drone would irritate him.

He said: “But this has changed my perception of them.

“This drone was being driven by pretty smart, young guys. One of them is planning to ski down K2 while being filmed by the other.”

The two Scottish mountaineers are well-known and highly regarded in the international climbing community.

In 2012, the men successfully completed what was described as the last great unclimbed route in the Himalayas.

They ascended the peak of Nanga Parbat in Pakistan via the Mazeno Ridge.

During the expedition they ran out of food, and Mr Allen said at the time the adventure left him “skeletal” and suffering from frostbite.

Drones have been found to be useful in locating lost climbers.

Lochaber Mountain Rescue Team, whose patch includes Ben Nevis, has trained drone operators among its members and has deployed the camera-equipped machines on rescues.

The RNLI has also been trialling drones for potential use in maritime rescues.

Last month, a 75-year-old man who went missing during a walk in an area of marshes was found by a police drone up to his armpits in water.

Washington/United States (21/5).   The Senate has confirmed Kenneth Braithwaite to be secretary of the Navy, giving the service its first...