In Courchevel 1850, there’s an eight-bedroom chalet that costs €295,000 a week. The price includes two chefs, two butlers and a massage therapist, but not helicopter transfers to the resort’s altiport, ski equipment or lift passes.

Given that kind of excess, you’d be forgiven for thinking that the Trois Vallées, the biggest linked ski area in the world, was an exclusive, mega-rich enclave. Yet here I am in Les Menuires, just two valleys to the east and on the same lift pass, staying in a bunkhouse-hotel hybrid where a dorm bed costs as little as £22 a night.

At Ho36, which opened last winter, the aesthetic is the opposite of gaudy luxe. Here, the plywood panelling, grey felt curtains, intricate cardboard art and mid-century lighting is more a vintage/industrial mash-up. It feels like the kind of accommodation you’d find on the west coast of America rather than in a French ski resort; the vibe is laid-back and not remotely pretentious.

Column: I got my first skiing in at Gore

Les Trois Vallées: great skiing – but away from the bling crowd

It’s not the first Alpine hostel to put appealing design and affordability at the top of the agenda. Rocky Pop in Les Houches and Moontain Hostel in Oz-en-Oisans do that too, but Ho36 is the first of its kind in the pricey Trois Vallées. It’s also big on flexibility: you can stay for one night or a week – great for taking advantage of cheap midweek flights.

“The location is perfect,” says manager Geoffrey Obry. “It’s right on the piste and bang in the centre of the Trois Vallées, so you can easily reach Méribeland Val Thorens, but also be in Courchevel within an hour and a half of skiing.”

Ho36 is near an area called La Masse, which gets the resort’s first rays of sun and is great for off-piste skiing and snowboarding, as I discover the next morning on empty, steep slopes and untracked snow (something you’d never find on a powder morning in Méribel). 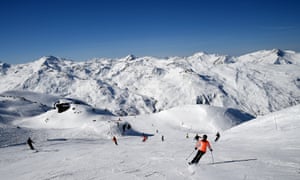 The resort may look more 1960s functional than chocolate-box pretty, but it sells itself on its unstuffy, welcoming vibe – its logo even says “Friendly Menuires”. It’s a favourite with solo travellers, as meeting people is easy, and seasonal workers tend to stay for many years, says Obry. Most of the runs end near the Croisette area, which has a hub-like feel and is a good meeting point at the end of the day.

In Ho36’s open restaurant and bar area, craft beer, cocktails and chai – rather than champagne – are the orders of the day, and the atmosphere is buzzy and inclusive. Ski instructors, guides and beanie-clad locals drink alongside guests (no fur or bling in sight), and it’s easy to strike up conversations. Noticeboards advertise skier and snowboarder meet-ups, so solo guests needn’t head out alone. There are yoga classes and regular band nights, too.

With plenty of wide, easy blue and green pistes, Menuires is suitable for beginners and families, but intermediate and advanced skiers and snowboarders also have the whole of the Trois Vallées at their disposal. To keep costs down I hit the supermarket and make packed lunches – there are seven salles hors sac, or picnic rooms, marked on the piste map – though there are also some reasonable lunch spots, such as Supernova in Val Thorens, which does great veggie and vegan food.

One day I ski across to Courchevel, a journey of around two hours that suits intermediates and above. The skies are grey, so fair-weather skiers have stayed in their luxury chalets, leaving this glorious mountain, which has great pistes and even better tree runs and couloirs, crowd free.

For an extra adventure, I join a group for a night in the recently refurbished Refuge Lac du Lou, which is reached via an off-piste run down from La Masse or an hour-long hike up a groomed trail once the lifts are shut. We did the latter, at sunset. A modern space of slate-coloured floors and stripped pine, the refuge offers a peaceful, off-grid experience with no wifi or internet. Accommodation is in dorms, and healthy, hearty food such as crozets de Savoie (small pasta squares) with mushroom sauce is served in the dining room, where white huskies lounge by the wood-burner.

Next morning we enjoy the run down in silence, before the lifts open – a fitting end to a low-key Trois Vallées holiday.