Rattling down the ice at 80 mph, Summer Britcher steered her sled into the next-to-last turn on the luge track — and crashed. In hindsight, she said, the wreck in that World Cup qualifying race in November was well-timed. Yes, it kept Britcher out of the luge finals in Igls, Austria, but it also gave the Baltimore-born Olympian time to re-evaluate her attitude toward the daunting sport that could earn her a medal in South Korea this month.

“Sitting there [in Austria], I realized I was putting too much pressure on myself and not really enjoying the sport that I love,” said Britcher, 23, of Glen Rock, Pa., about 8 miles north of the Maryland border. “I needed to change my mental approach.”

Alpine skiing: Marcel Hirscher is afraid of the melancholy – view

Myriam Nicole Out With Foot Injury

“Whenever I’m down, my dad asks, ‘Are you having fun?’ He has a great passion for his work,” she said. “He’s very lucky to have a career he loves — and he has always wanted that for us, too.”

So Britcher lightened up and, the following week, captured silver and bronze medals in World Cup races in Winterberg, Germany. She followed that with a World Cup victory Jan. 20 in Lillehammer, Norway, defeating Germany’s Natalie Geisenberger, the defending Olympic champion. 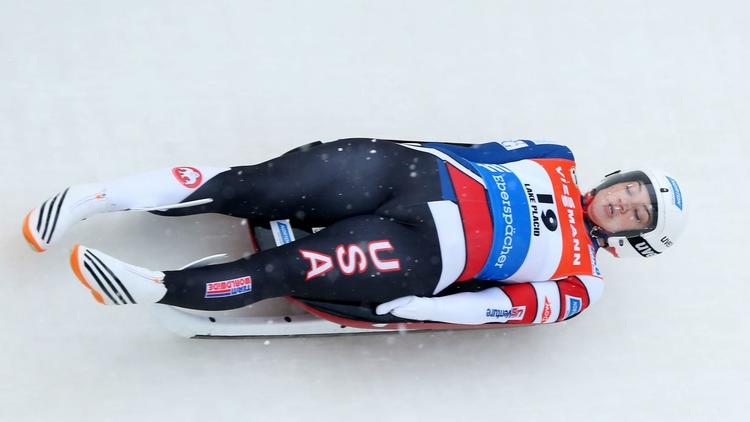 Looking back, Britcher said the smash-up proved “a weirdly liberating and eye-opening moment. If I hadn’t crashed, I probably would have kept that negative attitude and found myself off the podium the next week.

“I’ve never once not loved luge, though there have been times when I’ve gotten pretty mad at it. I thrive under pressure, but, if you’re not enjoying what you’re doing, what’s the point?”

That Britcher could pause and rethink her stance toward the sport that has consumed half her life speaks well of her future, those who know her said.

“That’s one of her good skills, being able to take an honest look at what she has done to see what she has to do to be better,” said Mark Grimmette, USA Luge sports programs director and a two-time Olympic medalist. “Her focus and discipline have increased exponentially in the last four years. How good can she be? Summer is capable of becoming one of the best in the world.”

It’s Britcher’s second trip to the Winter Games. In 2014, the youngest member of the luge crew, she placed 15th in Sochi, Russia. She has, she said, improved “mountains” since then.

“When I look at my races back then, my starts were terrible, just terrible. And I was so tiny then. I’ve gained 20 pounds in four years,” said Britcher, who stands 5 feet 10 and weighs 175.

“But having gone through that is a huge help in knowing how to handle the pressure. Hopefully, this time, while waiting to start [the runs], I’ll be able to breathe a little.”

She’s a mainstay on a U.S. team that, historically, is a lightweight in luge, earning just four medals in men’s doubles, none since 2002. Sochi produced America’s first singles medalist, Erin Hamlin, who captured a bronze and is back for more.

A former world champion, Hamlin, 31, mentors teammates such as Britcher who, she said, “has all that she needs to go as far as she wants in this sport. Summer is a pretty fierce competitor. She can have trouble on practice runs, but on race day she excels. She goes into a zone — and you don’t want to get in the way of that.”

Headstrong and outspoken, Britcher has squared off with team officials more than once over racing tactics.

“There have been ‘pointed discussions’ between her and her coaches,” Grimmette said. “Summer is definitely unique in that regard. But that’s her way of communicating — and it works for her.”

“Sometimes, when she’s given coaching advice, she get fired up about it. I tell her, ‘You’re the one on the sled, so take each piece of advice with a grain of salt.’ Yes, she sticks to her guns, but later on she’ll say, ‘You know something? They’re right.’ ”

Britcher has a puckish side, too, which backfired last year on the world stage. Attending a banquet for the world’s top sliders, Britcher noticed the German team, at the next table, playing a game called bottle flipping. One of them, Geisenberger, a two-time Olympic gold medalist, was faring badly, so Britcher seized the moment.

“I got it into my head to make a joke,” she said. “I turned and said, ‘Hey, Natalie, you should stick to luge.’ Well, she took it as a big criticism. I apologized profusely. I guess sarcasm doesn’t translate very well.”

But actions speak louder than words — and ascending the podium in Pyeongchang is Britcher’s goal.

“I’ve touched Erin’s medal,” she said, her voice tinged with awe. “It’s like a hockey player holding the Stanley Cup.”

Twice, she has tested the icy track in South Korea — the first time, last February, with a bevy of international luge stars who proceeded to go topsy-turvy.

“Everyone was crashing into wall after wall,” Britcher said. ‘We were all suffering together, but, you know, I’d never seen such camaraderie in the world luge community. It was really powerful, in a terrible way.”

To medal this year, she said, will take four “perfect” runs. One turn on the course looms especially large.

“When your sled comes out of curve nine, you almost feel airborne,” she said. “Point 1 inch in the wrong direction and you’ll hit a wall; there is no room for error.”

Britcher feels up for the challenge in a sport in which victory can boil down to as little as one-thousandth of a second.

“I need everything to go right, and a lot of luck on my side,” she said. “Then, fingers crossed, we’ll do it.”

Or have fun trying.