Vail to open Friday with 70 acres of terrain

There is this pervasive mountain song that will always be etched in our memory. It goes something like this:

Habari gani (How are you?)

How it all began

Individually, both of us wanted to climb Mt Kilimanjaro. But we didn’t realise that both of us were harbouring the same idea. Then one of us, Arjun, decided to book a tour company to climb Africa’s highest peak in October. The prospect of creating a lifelong memory together was too hard to resist. We soon found ourselves at Moshi together, ready to begin the trek.

Our guide gave us the three ‘golden rules’ for climbing the friendly and welcoming Kilimanjaro: trek at “pole-pole” speed (pronounced “Polay-Polay”, it means “slowly” in Swahili), drink plenty of water along the way, and have positive thoughts! 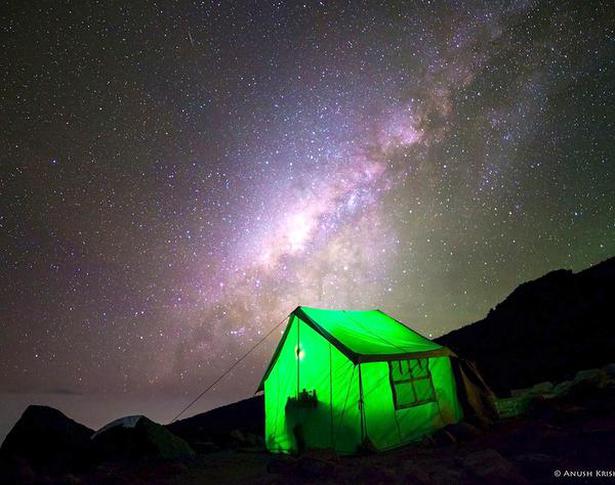 The six-day journey to the summit proceeded along the Lemosho Route. Along the way, we encountered the unique Dendrosenecio kilimanjari trees, scaled the 260-metre-high Barranco Wall and observed the city lights in Moshi, from way below where we camped every night. While the size of the summit cone humbled us as we ascended, it also felt liberating to be above clouds that stretched till the horizon.

We perfected minimising getting in and out of our tent — anything to save our breath. We made light of our sleepless nights on the slopes, with the Colobus monkeys’ loud screams and the endlessly-sliding sleeping bags.

The bright core of the Milky Way was still visible in the skies of the Southern Hemisphere right after sunset. Thinner air, absence of light pollution and the waning moon provided the perfect opportunity to observe and photograph our galaxy every night, before retiring to our tent — the “5-billion-star hotel”.

The race to the summit

In preparation for the summit night, we were fully dressed in layers to battle temperatures of -15C and wind chill. We must have weighed a tonne. We didn’t have an appetite at this altitude, so we ate what we could before beginning the push at midnight.

The ascent till 15,000 feet had been encouraging, despite unpredictable weather, including sudden downpours, sleet and sub-zero temperatures. However, the summit night’s climb of 4,000 feet, most of which was on scree, exposed the true separation of body and mind. We were frequently running out of breath and needed water every other minute. Whenever we looked up, we only saw headlights disappearing into the sky. At around 3 am, our water-pack froze and all we were left with was a 500 ml thermos flask, with many more hours to go. At around 5.45 am, the eastern sky turned orange; it was one of the most beautiful sunrises we have ever witnessed.

Then we arrived at Stella Point, which is on the rim of the crater at the top, followed by a gentle hike up a few hills to Uhuru Peak. It was such a joy to see the words “Congratulations”, “Africa’s highest point” on the sign. The sight of the glaciers shimmering in the morning sunlight made it all worth it.