Olympic hero Chloe Kim dominated in her first international contest since the Pyeongchang Games nine months ago, posting the top marks in the field during her first two runs to win the season-opening World Cup snowboard halfpipe event at Copper Mountain, Colorado. 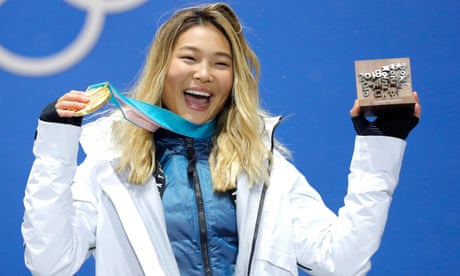 The greater Los Angeles native scored 90 and 92.25 during her first two runs, allowing her a victory lap as the last rider during the third. Her US Olympic team-mate Maddie Mastro finished second after posting an 85.00 on a clutch final run, while China’s Xuetong Cai came in third (77.75) in the absence of the American Kelly Clark, the gold medalist at Salt Lake City 2002 and five-times X Games gold medalist.

“It feels so good to get back,” a giggly Kim said afterward. “It’s been pretty hectic, like this summer was insane.”

Gold-medal winner Chloe Kim, a daughter of Korean immigrants, is a star in two cultures

She added: “It’s a real good pipe to start the season off with. Today was so much fun. All the girls were loving it.”

Kim, 18, launched to global stardom in February when she became the youngest ever female athlete to capture Winter Games gold on snow with a transcendent performance in the Taebaek mountains that included back-to-back 1080s, the daring maneuver she remains the only female rider to have landed in competition. She landed a single 1080 during each of her first two runs on Saturday afternoon.

The American prodigy, who also won last year’s X Games and US Open titles, has not finished lower than second in any competition since February 2017. She was back in action on Saturday for the first time since March, when she completed the Olympic-US Open double in Vail.