Georgia Simmerling has been described as one of the grittiest and most talented Canadian Olympians. The West Vancouver, B.C., native donned the Maple Leaf at both the Summer and Winter Games, and at the age of 29, became the only Canadian athlete to compete in three different Olympics in as many different sports.

But after 11 years in the Alpine Canada program — four in alpine skiing and seven in ski cross — Simmerling is hanging up her skis and heading back to the cycling velodrome to train full-time for her second summer Olympic Games.

Simmerling’s career with the national alpine ski team began in the 2007-08 season. She finished a personal-best 27th in the super-G in Vancouver 2010 and was the top Canadian in the same discipline at a World Cup stop in Lake Louise, Alta.

“Being the top Canadian at Lake Louise was an exciting experience for me,” Simmerling said. “Walking up on the podium in front of Canadian fans was an incredible feeling and representing Canada at my home Olympics was something I’ll never forget. Walking through B.C. Place in front of 60,000 fans cheering for Canada was incredible.”

At the end of the 2010 season, Simmerling transitioned to ski cross competition and within her first two years in the sport, made her first World Cup podium. She’d go on to reach the podium eight more times over her seven-year career — including 25 top-eight finishes — and placed 14th in Sochi at her lone Olympics as a ski cross racer.

But Simmerling’s triumphs didn’t come without its own share of stumbles along the away. In her rookie season, Simmerling broke three vertebrae in a fall mid-race and was involved in another crash at the 2015 world championships.

With plates and screws in her wrists, Simmerling’s recovery began on a bike and so did her pursuit of competing at a Summer Games. In January 2016, Simmerling made her debut as a track cyclist winning gold in the women’s team pursuit at a World Cup event in Hong Kong. She and her teammates followed that up with a silver at the world championships in March clinching Simmerling’s spot on the Olympic squad for Rio.

After earning Olympic bronze in the team pursuit, Simmerling returned to the slopes with her eyes set on qualifying for the 2018 Games in Pyeongchang. She carried that momentum from Rio over the next two seasons with four podium finishes on the World Cup circuit.

Simmerling appeared set for a breakthrough at the Winter Games before disaster struck. In her last race before Pyeongchang, Simmerling crashed in the semifinal of a World Cup event in Kananaskis, Alta., breaking both of her legs and tearing multiple knee ligaments.

Simmerling’s goal of a fourth Olympics was put on hold, but it wasn’t the end. After undergoing surgery, Simmerling is back at work — rehabbing in the hopes of rejoining her track cycling teammates in time for Tokyo 2020.

“This injury has been the hardest mentally and physically to overcome, so I’ve had to work the hardest to maintain a positive outlook and keep focused,” Simmerling said. “I believe a positive mind feeds the body and my body is responding to that. It’s amazing to see the progression every day.”

Simmerling knows such a scenario isn’t even possible without her coaches and teammates who’ve pushed and shaped her into the athlete she’s become today on and off the hill.

And that feeling is mutual with her ski cross teammate and Olympic gold-medallist, Kelsey Serwa.

“Georgia is the most positive, passionate, and dedicated person I know. She is an incredible human being who is compassionate and supportive,” Serwa said. “As a friend and teammate, I feel very fortunate to have shared countless adventures with this incredible woman and can say that my life is that much brighter with her in it.” 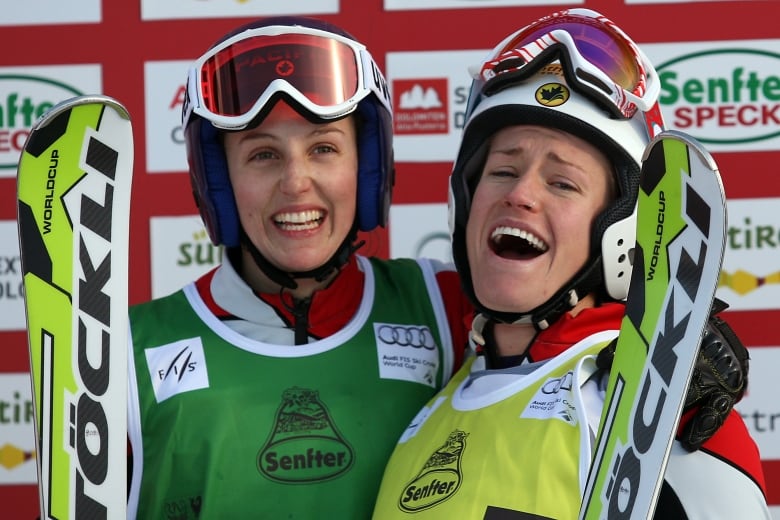 Serwa, left, and Simmerling raced alongside each other for many years on the World Cup circuit. (Pierre Teyssot/AFP/Getty Images)

Simmerling is excited of the prospect of being part of a team again. She returns to the sport a much different track cyclist with more knowledge and previous success under her belt. But the grind remains the same and Simmerling looks forward to that challenge on the road to Tokyo.

“I didn’t expect to be starting from scratch in my pursuit to the 2020 Games,” said Simmerling. “It’s a bit daunting…it’s crazy to think of where I’ll be in the next few months. I’m excited to see where this journey takes me and knowing that I have the support from my winter and summer teammates is huge.”