Just shy of her first birthday, and already a sensation on the mountain, a girl is taking the basin by storm, getting a jump start on the ski season before she’s barely old enough to walk.

Her parents, Nick and Whitney Rowley of Boise, bought their daughter the pint-sized pink and purple snowboard just weeks after she was born.

Their goal, to have Cash snowboarding by her first birthday, turned out to be pretty realistic for a dad with a video production company that documents professional boarders and a mom who is a former boarding instructor.

“And when she started walking at nine months, it was like, ‘Alright, we can do this,’ and then just to see her on the ski hill, I kind of starting tearing up, of course, like a sappy Mom that I am,” Whitney Rowley said.

Dad Nick Rowley calls it the money moment he will never forget: “It was just really cool – it was just a really proud Dad moment for me.”

To get her two, wobbly legs comfortable on one solid board, the family practiced carefully pulling cash across the living room floor, simulating Idaho’s slopes. 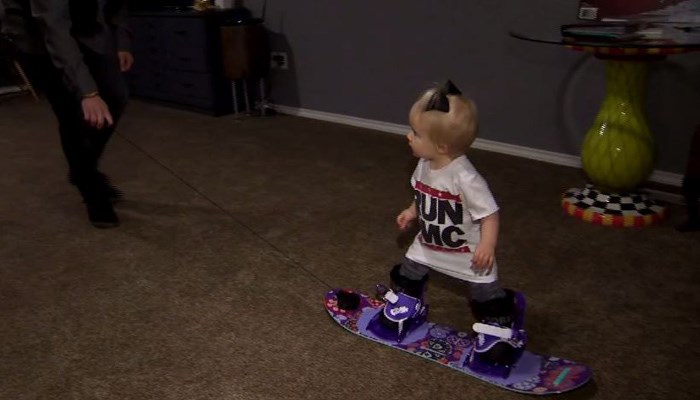 “The carpet offers a soft place for her to land and get kind of comfortable with being pulled or moving,” Nick Rowley said.

With just enough snowpack in December, Bogus Basin has opened a portion of its beginner slopes.

He said Cash may try surfing lessons in California this February, but that’s also prime season for carving turns on the Gem State’s cuordoroy slopes.

Either way, it’s full speed ahead for the Rowleys and their baby on board.

Indian-origin man killed by armed robbers in US