All You Need is Stoke

All You Need is Stoke

For 14-year-old skier Kirsty Muir, from Aberdeen, Scotland, lack of snow has never stood in her way from reaching full stoke. On June 6, 2018, Momentum Camps and the Sarah Burke Foundation announced Muir as this year’s recipient of the ‘Spirit of Sarah’ Scholarship, making her the first European skier to win the award.

The ‘Spirit of Sarah’ Scholarship was created to honor former camper and long-time coach, Sarah Burke, who died in 2012 in a tragic skiing accident. Burke was a huge influence on the sport, starting a movement that forced the Dew Tour to include women’s skiing and leading the charge to bring ski halfpipe and slopestyle to the 2014 Olympic Winter Games in Sochi, Russia. Other than her obvious talent and strength, Sarah’s kindness and love of life inspired young women throughout the sport’s community and beyond.

This year, Muir’s application made it clear who the winner should be.

“Just the vibe and the feel and the passion you felt through her video, she just blew every other [one] out of the water,” said Cassie Sharpe, veteran Momentum Camps coach and 2018 Olympic gold medalist in women’s halfpipe. “Most of her clips were on dry slope and [the judges] just thought that if this girl can do all of this on dry slope, imagine what she can do if she comes to camp.”

But, with only five ski resorts in the entire country of Scotland, how does a young lass get exposed to this sport?

“I learned to ski when I was three, almost four. Basically, my mom and dad wanted to go on ski holiday with me, my sister and my brother,” said Muir. “That’s why I started skiing. When I was about six or seven [I joined Saturday club and] my ski coach recognized that I liked the jumps because at the end of each session we [would ski for] just five minutes on the freestyle slope.” It was these short sessions at the end of practice that inspired the young skier to switch from the race-oriented Saturday club to Wednesday club, which focused on freestyle skiing.

Today, Muir stays connected to the freeski community through social media. It was on Instagram that Kirsty learned of Momentum Camps and the ‘Spirit of Sarah’ Scholarship.

“I’ve heard so many amazing stories about the Momentum Camps and about Whistler,” said Muir, “and when I saw [on Momentum Camps’ Instagram] that there was a ‘Sarah Scholarship,’ I thought I might as well try and apply for it because it’s such an amazing place to go and [I’d] regret not trying.”

It was at this moment Muir set a new goal for herself: to win the ‘Spirit of Sarah’ Scholarship. With an application video showcasing Muir’s unique style and genuine passion for the sport, it comes as no surprise that she did just that. Muir was invited to Girls Week at Momentum Camps July 10-17 and for this 14-year-old, Girls Week was a special time to attend the camp.

“[Girls Week] was really good because there’s so many more girls… I don’t really ride with many girls back home,” Muir said. “It was also amazing because that’s the week that Sarah Burke actually set up, so it was great to [attend] and try to progress myself, but also just remember Sarah as well.” 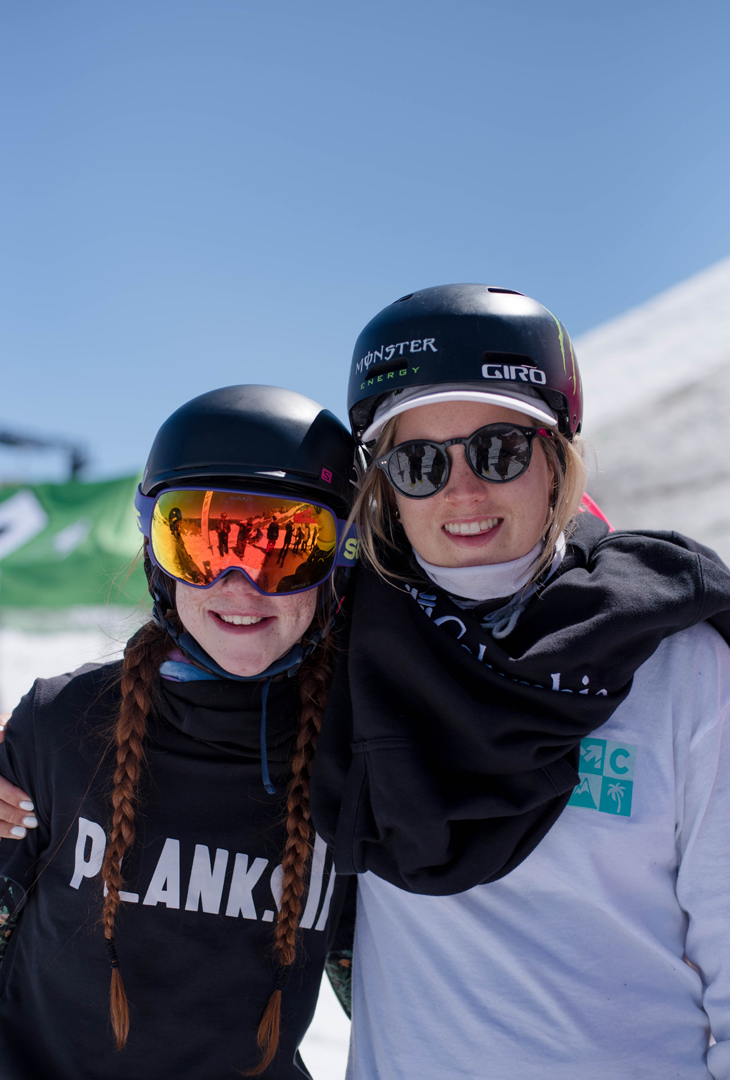 The week of training offered Muir a lifetime worth of memories and experiences but it also served up its own set of challenges. Attempting a cork 7–a trick she had landed before– Muir over-estimated her speed, causing her to over-rotate and end up on her back. But, much like Sarah Burke, who made this opportunity possible for the young skier, Muir brushed herself off, sent it again and stomped it.

“She’s got balls,” said Sharpe. “She sets something for herself and she’s going to do it, nothing is standing in her way. That cork 7 was the day I was coaching her and we talked about trusting yourself, just getting over that hump and knowing that she’s done it before. The ability was there, just to get back on that and I feel like Sarah was always like that. She’d take hard slams and she would just get right back up and right back to it and I think that that’s definitely something that we all see in Kirsty here.”

If you ask the bubbly, red-headed Muir what her favorite part about camp was, she’ll give you a simple answer.

“Everything! There wasn’t one bit that was better than another,” she said.

At only 14, Muir has a bright future ahead of her, including heading off to New Zealand for the Junior World Championships this August. As for her coach, what does Sharpe predict for the Scottish skier?

“Big things,” said Sharpe. “This girl is sick. The vibe, the feel is always positive, always excited, always hyping everyone else up around her. If she sticks with it, this girl is going places.” 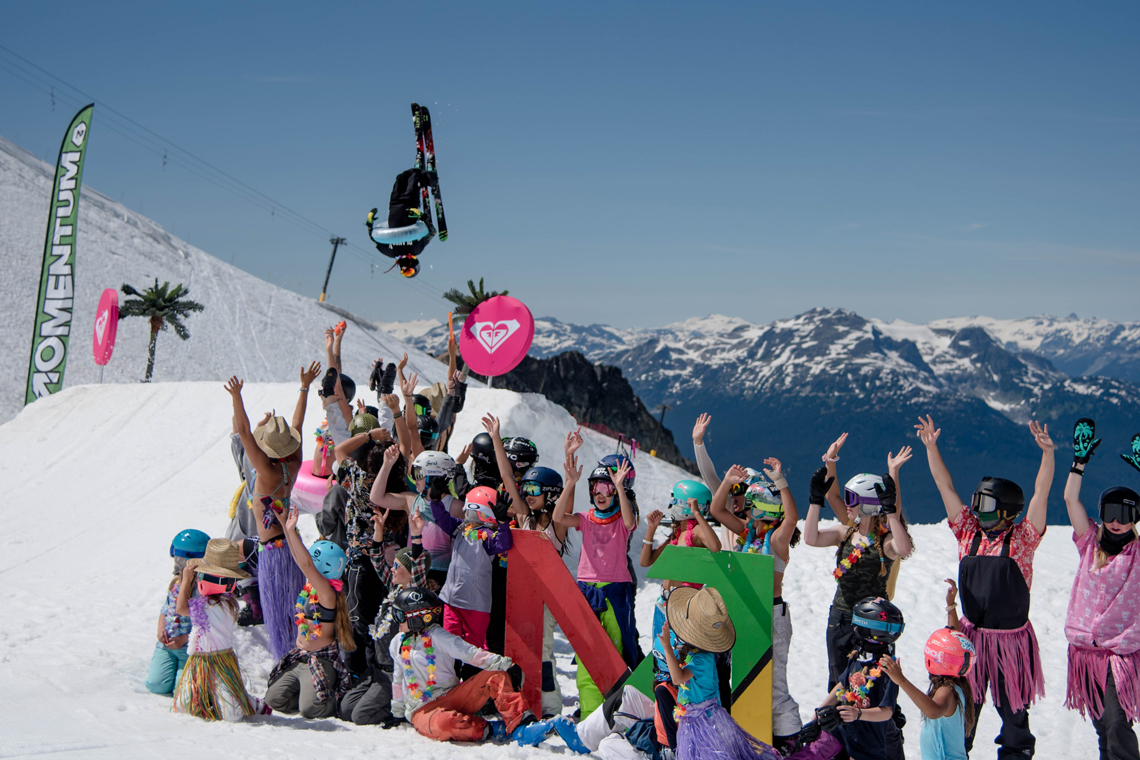 “I just want to try and progress,” said Muir, “and just really have fun with it as well.”

Spoken like a true champion, Muir has her eyes set on competitions like the X Games and Dew Tour. With the pure talent, work ethic and positive attitude of this young Scottish skier, we’ll be keeping our eyes peeled for her professional debut. 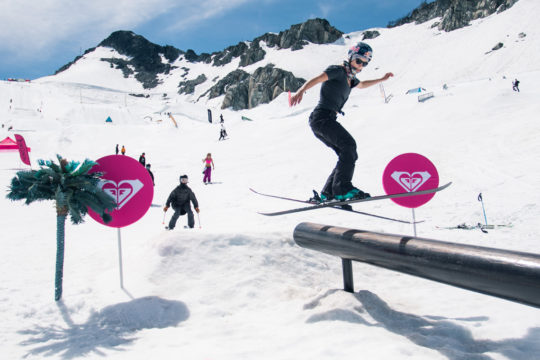